A Forensic Gold Mine I: Forensic Analysis of Viber Messenger on Windows 10

Over the past weeks, I was looking at the forensic artefacts that the desktop versions of instant messenger leave. While a lot of work out there focuses on the forensic analysis of the mobile apps, I rather wanted to have a look at the traces that the desktop versions leave. My goal was to find out what messages, media and metadata could be recovered. The first candidate I had looked at was Viber developed by Rakuten. With over a billion user it is among the top six messengers worldwide. From a DFIR perspective this application is an extremely valuable source of information. Let’s check out why!

Info
In order to avoid changing artefacts this work should be carried out on a forensic copy of the target machine. There will be no need to spin up the machine all work can be done from a forensics software such as Autopsy or Encase.

The forensic investigation of this messaging application is extremely straight forward, as all the information are stored in a single SQLite database named viber.db along with other db and config files. This file is located under AppData Roaming on Windows. The full path will follow this structure:

Please note that the phone number neither includes a + nor 00 for the country code, for the US this would be just 1. Once located, the file can easily be loaded into a SQL lite browser of your choice. I was using DB Browser for SQLite, but pretty much any software such as DBeaver or HeidiSQL would do.

In the current version (14.6.0), the database consists out of 15 tables, which are most interlinked through an events table (click on the image to make it bigger or open in a new tab). From a digital forensics perspective, the most interesting ones are undoubtedly the messages, calls and the contact tables as these might hold some potential evidence about the case you are inspecting. 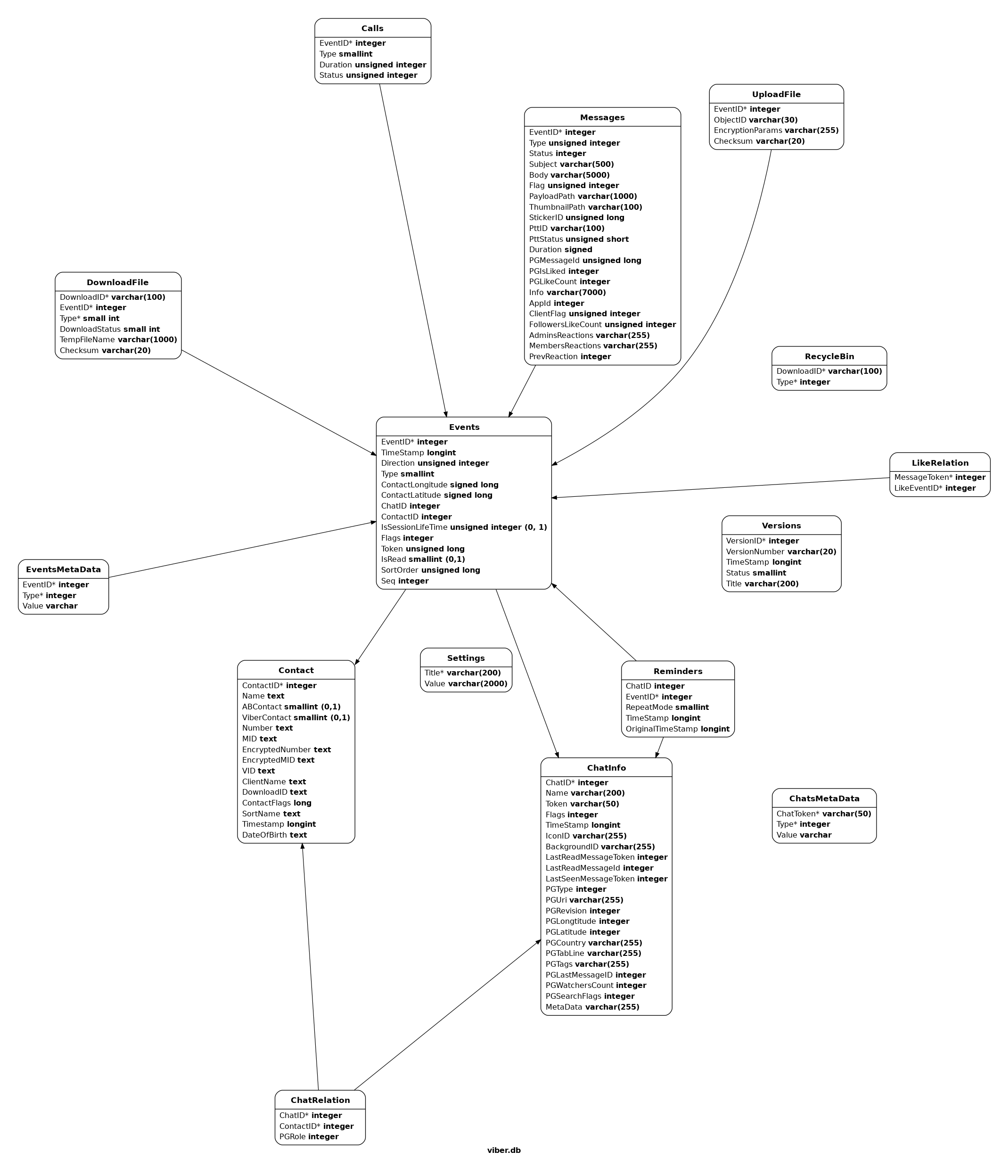 Let’s look at a common scenario, if for example the exchanged messages and the participants should be extracted, then the contact and messages have to be joined to through the events table using a simple inner join. This join is necessary, as the messages table itself does not indicate who sent the message. In this example, I’ve also converted the epoch time into a bit more readable format.

In a similar fashion, the phone calls can be joined through the events to the contacts in order to see which phone calls were issued or received.

I tried it with two unanswered call and that gave me the following result:

Other Artifacts of Interest

Besides the previous two examples, there is an abundance of information available within the viber.db.

This was a really fun little project, as it allowed me to play around with a previously unknown messenger and do some investigative work. Seeing that all messages can be synced in there entirety and stored in an unencrypted format, makes it an extremely interesting target for any forensic investigation. Even though this post could only scratch the surface of the data stored in the SQLite database, due the limited time which I could spend on this project, it should be enough to get your own investigation started. I hope this post is also useful for your own forensic investigation.

Posts in this Series